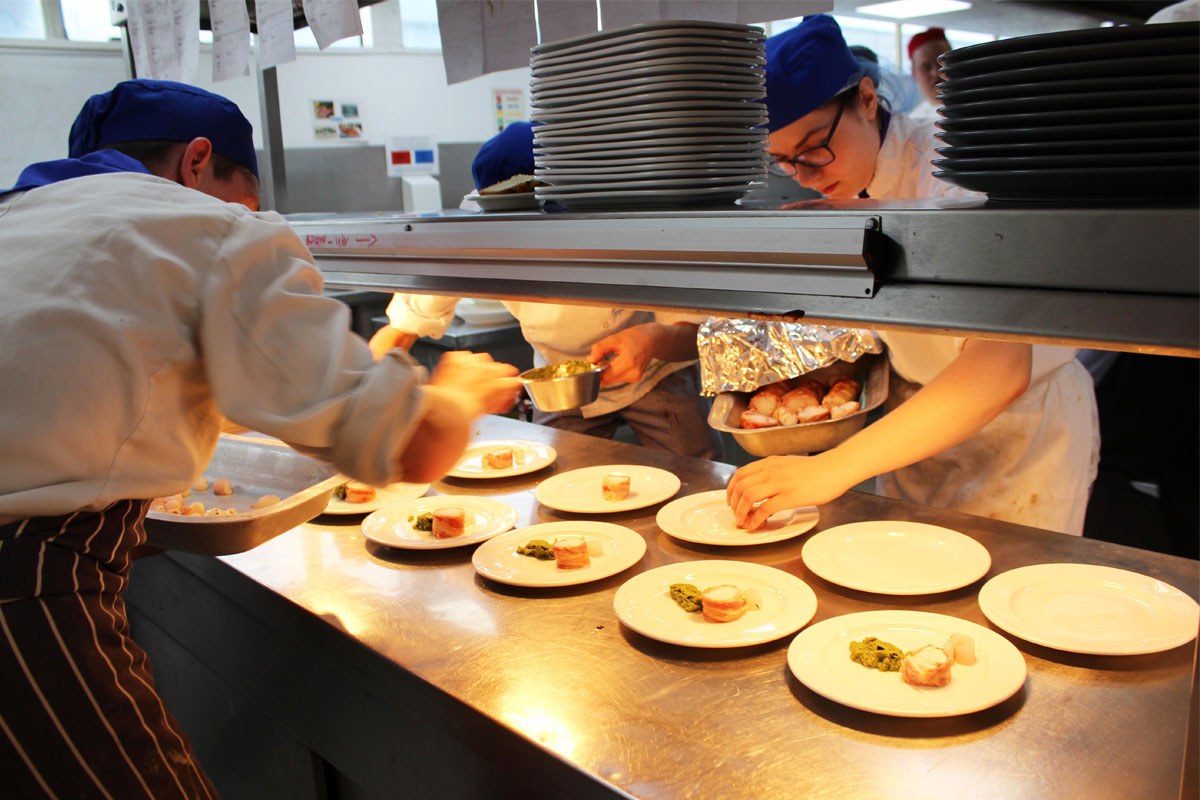 Hospitality and Catering students at Brighton MET felt the heat in a recent ‘Hell’s Kitchen’ charity challenge. Over the course of two weeks, four teams of students went head-to-head to create and serve the very best three course meal, with the winner going through to the third and final week. Family, friends and members of the public paid £25 for the meal, with all proceeds from the final being donated to charity.

The four student head chefs took responsibility for everything from designing their menu, to organising the team supporting them with the creation and serving of the food, all under the guidance of MET Chef Lecturer, Allan Paul. The intricate menus included canapés, bread, starters, mains and desserts, with guests scoring each dish individually based on presentation and taste.

During each week, the two competing chefs were also accompanied by a professional chef who worked with them in the kitchen. For the first week, students Vicky Crowhurst and Tom Younger were assisted by Isaac Bartlett-Copeland, a previous MET student, and owner of popular local restaurant Isaac At. The second week saw Ian Swainson from The Pass at South Lodge supporting Amanda Cummins and Tom Bridge.

The finalists, Tom Younger and Amanda Cummins, were joined by Richard Mann from the Camellia at South Lodge. Richard said, 'This is the first time I’ve been involved in this event and it’s great to see students at the grassroots level and how they’re developing the skills they need to prepare them for working in a professional kitchen'

At the end of the final night, Tom Younger was announced the MET’s 2017 ‘Hell’s Kitchen’ winner. His inspired menu included a starter of grilled mackerel served with a mango purée, lime gel, caviar and nasturtium flowers. For the main he served venison fillet and croquette with a black pudding crumb, beetroot and maple purée, mini fondant potatoes and a juniper sauce. He finished his menu with a dessert comprising of mint gel, mojito sorbet on a Brighton rock crumb, tempered dark chocolate shell and caramelised cherry gel.

The successful event, which is an annual occasion in the MET hospitality and catering department’s calendar, raised over £2,000 which was split between Ronald McDonald House Brighton and the Early Birth Association.

Published: 5th Jul 2017 By Claire Fellows Back to all posts
Share with a friend